You’ll hear Ukelele Ike from 1936 and 1940 radio including a wild scat version of Margie.

See the full Phantom Dancer play list of swing and jazz mixed by Greg Poppleton from live 1920s-60s radio below.

Cliff Edwards left school at age 14 in 1909 and began entertaining as a singer in saloons.

Most bars had pianos in bad shape or none at all, so Edwards taught himself to play ukulele to serve as his own accompanist (choosing it because it was the cheapest instrument in the music shop).

He was nicknamed ‘Ukulele Ike’ by a club owner who could never remember his name. He got his first break in 1918 at the Arsonia Cafe in Chicago, Illinois, where he performed a song called ‘Ja-Da’ written by the club’s pianist, Bob Carleton. Edwards and Carleton made it a hit on the vaudeville circuit. Vaudeville headliner Joe Frisco hired Edwards as part of his act, which was featured at the Palace in New York City – the most prestigious vaudeville theatre – and later in the Ziegfeld Follies.

In 1924, Edwards performed as the headliner at the Palace, the pinnacle of his vaudeville success. That year he also featured in George and Ira Gershwin’s first Broadway musical Lady Be Good, alongside Fred and Adele Astaire.

Edwards made his first records in 1919 and recorded early examples of jazz scat singing in 1922.

In 1923 he signed to Pathé Records and became one of the most popular singers of the 1920s, appearing in several Broadway shows. He recorded many of the pop hits of the day, including ‘California, Here I Come’, ‘Hard Hearted Hannah’, ‘Yes Sir, That’s My Baby’, and most famously, ‘I’ll See You in My Dreams’.

Edwards was responsible for the soaring popularity of the ukulele.Millions of ukuleles were sold during the 1920s and Tin Pan Alley publishers added ukulele chords to standard sheet music. Edwards always played American Martin ukuleles, favoring the small soprano model in his early career. In his later years, he moved to the sweeter-sounding, large tenor ukulele more suitable for crooning, which was becoming popular in the 1930s.

Edwards’ continued to record until shortly before his death in 1971. His last record album, Ukulele Ike, was released posthumously on the independent Glendale label.

In 1929, Cliff Edwards was playing at the Orpheum Theater in Los Angeles where he caught the attention of movie producer-director Irving Thalberg. His film company Metro-Goldwyn-Mayer hired Edwards to appear in early sound movies. After performing in some short films, Edwards was one of the stars in the feature Hollywood Revue of 1929, doing some comic bits and singing some numbers, including the film debut of his hit ‘Singin’ in the Rain’. He appeared in a total of 33 films for MGM into 1933.

Edwards was also an occasional supporting player in feature films and short subjects at Warner Brothers and RKO Radio Pictures. He played a wisecracking sidekick to western star George O’Brien, and filled in for Allen Jenkins as “Goldie” opposite Tom Conway in The Falcon Strikes Back. In a 1940 short, he led a cowboy chorus in Cliff Edwards and His Buckaroos. Throughout the 1940s he appeared in a number of B westerns playing the comic, singing sidekick to the hero, seven times with Charles Starrett and six with Tim Holt.

Cliff Edwards most famous voice role was as Jiminy Cricket in Walt Disney’s Pinocchio (1940). Edwards’s rendition of ‘When You Wish Upon a Star’ is his most familiar recorded legacy. He voiced the head crow in Disney’s Dumbo (1941) and sang ‘When I See an Elephant Fly’.

In 1932 Edwards had his first national radio show on CBS Radio. He continued hosting network radio shows into 1946.

Edwards was an early arrival on television. In the 1949 season, he starred in The Cliff Edwards Show, a three-days-a-week (Monday, Wednesday, and Friday evenings) TV variety show on CBS. In the 1950s and early 1960s, he made appearances on The Mickey Mouse Club (see video below), in addition to performing his Jiminy Cricket voice for various Disney shorts and the Disney Christmas spectacular, From All of Us to All of You.

This week’s Phantom Dancer video of the week is The Mouseketeers jitterbugging and playing uke to Cliff Edwards on a Mickey Mouse Club from 20 November 1956 TV. Includes Dennis Day and Annette Funicello. Enjoy!

On this week’s Phantom Dancer with Greg Poppleton, your weekly non-stop mix of swing and jazz from live 1920s – 60s radio, you’ll hear a set of Louis Armstrong live on 1930s-40s radio, including a radio recording he made with Fats Waller and his Rhythm. We hear from singers Patti Page, Ginny Simms and Frank Sinatra on their own radio features. Julie London also makes a rare 1956 radio appearance. And we’ll finish with a Charlie Parker set from WMCA NY radio in 1949.

Hear the show archived at 2ser.com

The Phantom Dancer is your non-stop 2 hour mix of swing and jazz from live 1920s-60s radio every week online and on 2SER radio.

The final hour of the mix is all vinyl.

The show is then archived for you to listen to any time at 2ser.com/Phantom_Dancer.

Your Phantom Dancer Video of the Week is the Laurel and Hardy (with Anita Garvin) classic, Blotto (1930)

Here is your 13th October Phantom Dancer play list and video of the week (and link to the archived show) 107.3 2SER Sydney 12noon – 2pm.

You can hear The Phantom Dancer live-streamed during the Tuesday broadcast at http://www.2ser.com. This show will also be archived at 2ser.com after the broadcast. To hear the archived show, visit the 2SER website, click Program Guide, then Phantom Dancer, and enjoy your non-stop 2 hour swing jazz mix.

On this week’s show we open with Australian singer and comedian Nell Fleming and a set of women singers, there’s a set of dance music in Arabic, Yiddish and from Holland, swing bands from live 1939 – 1940 radio, live bop and live dixieland radio including a broadcast excerpts from Adelaide and Melbourne in 1949.

Plus, the last hour of the show is, as always, ALL VINYL.

Not on the play list is a whole 15 Minutes of Chuck Foster and his Orchestra broadcasting in 1950 from WREC in Memphis. Enjoy!

HEAR THE SHOW ONLINE AT 2SER

As this week’s Phantom Dancer Video of the Week, recorded at ABC-TV in Sydney in 1969, Julius Sumner Miller investigates the Heat Energy Transfer By Convection. Enjoy!

Today’s show is a classic because, I must, unfortunately be away from the studio. But I’ve picked a doozy of a show for you!

Professor Julius Sumner Miller 1969 ABC TV Science series, Dramatic Demonstrations in Physics has been so popular that I’ve decided to rerun it. Also, I can’t get enough of the good Professor. So this week, it’s Episode 1, the Idea of the Centre of Gravity.

Your Phantom Dancer Video of the Week is Julius Sumner Miller giving Dramatic Demonstrations in Physics on the matter of Further Adventures in Electromagnetism. This is program 44, recorded at ABC-TV in Sydney in 1969. Enjoy…

You can now hear the show online at 2ser.com

Your Phantom Dancer Video of the Week is Julius Sumner Miller giving Dramatic Demonstrations in Physics on the matter of Electrostatic Phenomena. This is program 38, recorded at ABC-TV in Sydney in 1969. Enjoy…

On this week’s 2 hour swing and jazz mix you’ll hear a rare radio broadcast from Shep Fields’ New Music (including early electric guitar) and a broadcast excerpt from Glen Island Casino by Bob Strong. There’s also a couple of sets of jazz and dance from 1920s-30s radio for your listening and dancing pleasure.

And for your Phantom Dancer Video of the Week, from 1929, rap from the High Hatted Tragedian of Jazz, Ted Lewis. There’ll be more Julius Sumner Miller next week!

Your 9 December Phantom Dancer brings you more rare and sparking swing and jazz from live 1920s – 1950s radio and TV.

You can now hear it online. For a month. At 2ser.com

And as your Phantom Dancer Video of the Week, part 14 in the ongoing series of Dramatic Demonstrations in Physics has Professor Julius Sumner Miller demonstrating Pascal’s Principle, The Properties Of Liquids. These programs were made at ABC TV in Sydney in 1969. 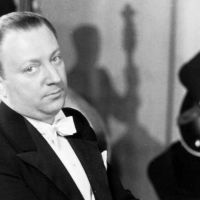