A fun afternoon at Penrith RSL.

Here’s a trio of photos from today’s 30 March gig.

And there was lots of dancing and lots of fun. It’s an inspiration to play to dancers. It’s a joy to play to such a warm and appreciative audience.

At Sydney Rowers the gig before, in April, someone took this film of the Jazz Deco band and I, then through a third party, generously sent it on to me to share with you…

SANTO GRASSO JAZZ PHOTOS
What a wonderful surprise then, just before downbeat on the first set, to see my favourite photographer, Santo Grasso. He’d come along to take photos of the band.

Now he’s generously sharing them with us here.

Where can you see us next?

There’re some rare, rare early jazz radio broadcasts for your listening pleasure on this week’s Phantom Dancer. And below, read an insight from Helen Keller about how radio brought music to the deaf in the 1920s.

The Phantom Dancer is produced and presented by Australia’s only authentic 1920s-30s-style singer and band leader, Greg Poppleton.

And that got me thinking about 1920s radio and how it was perceived. That’s when I found two letters from 1924 and 1926 quoted by Timmy D. Taylor in his paper, ‘Music and the Rise of Radio in 1920s
America: technological imperialism, socialization, and the transformation of intimacy’, Historical Journal of Film, Radio and Television, Vol. 22, No. 4, 2002.

The two letters come from the very early years of radio as a mass entertainment medium. They both describe how deaf people could ‘hear’ music on the radio.

The first letter is from the famous deaf and blind social activist, Helen Keller, in 1924.

It is a letter to the Symphony Society of New York and describes her joy at hearing a symphonic concert on WEAF Radio, New York City.

“I have the joy of being able to tell you that, though deaf and blind, I spent a glorious hour last night listening over the radio to Beethoven’s ‘Ninth Symphony.’

I do not mean to say that I ‘heard’ the music in the sense that other people heard it; and I do not know whether I can make you understand how it was possible for me to derive pleasure from the symphony. It was a great
surprise to myself. I had been reading in my magazine for the blind of the happiness that the radio was bringing to the sightless everywhere. I was delighted to know that the blind had gained a new source of enjoyment; but
I did not dream that I could have any part in the joy.

Last night, when the family was listening to your wonderful rendering of the immortal symphony some one suggested that I put my hand on the receiver and see if I could get any of the vibrations. He unscrewed the top, and I lightly touched the sensitive diaphragm. What was my amazement to discover that I could feel, not only the vibrations, but also the impassioned rhythm, the throb and the urge of the music. The intertwined and intermingling vibrations from different instruments enchanted me. I could actually distinguish the cornets, the roll of the drums, deep-toned violas and violins singing in exquisite unison. How the lovely speech of the violins flowed and flowed over the deepest tones of the other instruments! When the human voices leaped up thrilling from the surge of harmony, I recognized them instantly as voices. I felt the chorus grow more exultant, more ecstatic, upcurving swift and flame-like, until my heart almost stood still. The women’s voices seemed an embodiment of all the angelic voices rushing in a harmonious flood of beautiful and inspiring sound. The great chorus throbbed against my fingers with poignant pause and flow. Then all the instruments and voices together burst forth—an ocean of heavenly vibration—and died away like winds with the atom is spent, ending in a delicate shower of sweet notes.

Of course, this was not hearing, but I do know that the tones and harmonies conveyed to me moods of great beauty and majesty. I also sensed, or thought I did, the tender sounds of nature that sing into my hand—swaying reeds and
winds and the murmur of streams. I have never been so enraptured before by a multitude of tone-vibrations. As I listened, with darkness and melody, shadow and sound filling all the room, I could not help remembering that the great composer who poured forth such a flood of sweetness into the world was deaf like myself. I marveled
at the power of his quenchless spirit by which out of his pain he wrought such joy for others—and there I sat, feeling with my hand the magnificent symphony which broke like a sea upon the silent shores of his soul and mine.

Let me thank you warmly for all the delight which your beautiful music has brought to my household and to me. I want also to thank Station WEAF for the joy they are broadcasting in the world.”

“This information has been conveyed to Paul Ash, orchestra leader and radio star of KYW in letters from several women who explain that these are the only sounds they have been able to hear and that they enjoy the jazz music although otherwise deaf.

A famous ear specialist of Chicago has become interested in the subject, it is reported, and is conducting a series of tests to determine the possibilities of utilizing this means of ‘bone conduction’ of sound so that those
who have lost normal hearing may through radio have the pleasures of music.

When the unique investigation has been completed the renowned specialist promises the issuance of a report and a test program over the air is to be given with deaf persons asked to ‘listen in’ and to report what they ‘hear’.”

VIDEOS OF THE WEEK

Your Phantom Dancer Videos of the Week feature Helen Keller herself.

In the first video, the teacher who taught her to speak, Anne Sullivan (who was blind herself), explains with Helen demonstrating, how Helen learnt to talk after hitherto being dumb as well as deaf and blind. Her first word was ‘it’. Her first sentence, “I am not dumb now.” Be amazed…

And here is a 1919 dramatisation of her childhood. The film is called ‘Deliverance’…

Greg Poppleton and his band of 1920s – 1930s jazz swing musicians had a fantastic Saturday. We played two fun jazz gigs audiences greatly enjoyed and danced to – Penrith RSL Saturday Jazz, followed by ‘Deckers in the Night’ at the Sydney Bus Museum.

Saturday was Remembrance Day. At the band’s previous show in August I had been asked by Penrith Club members to introduce a suitable song to commemorate the day.

I chose the 1918, armistice year hit, ‘After You’ve Gone’, inspired by one of my favourite singers, Marion Harris,

As always, I took some snaps of the Greg Poppleton band for you. The band features some of Sydney’s most experienced swing, jazz musicians. All are world-toured.

Drummer, Bob Gillespie, played in the Glenn Miller Orchestra for their 1990s Australian tours as well as being drummer for Maynard Ferguson’s English Band and musical director for Lovelace Watkins. You can see him here backing Lovelace Watkins on ‘My Way’. 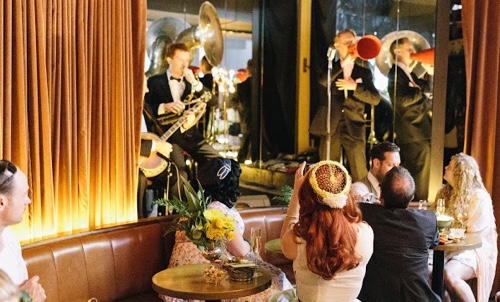 Having a live 1920s – 1930s jazz and swing band can make a fantastic difference to your wedding, but having Australia’s only authentic 1920s – 30s singer and band gives you the biggest emotional impact. We’re looking forward to playing a wedding this Saturday in Kiama for an excited bride and groom who were thrilled when they saw the band at the Corrimal Hotel last month. Read Greg’s article about the wedding in the photo above, and find out how Greg Poppleton and the band can add real 1920s – 1930s charm to your special day.

Greg and the 1920s – 1930s band are heading west to one our favourite venues, Penrith RSL, 8 Tindale St Penrith, 2-5pm. We’ve been playing at Penrith for nine years and the local jazz club tells us we are one of their most popular bands.

Dance floor, child friendly, affordable bar and bistro. FREE entry!
Drop in for as long as you like – you don’t have to stay for the whole show, though most people do. Read Greg’s article with photos about the band’s August 2017 Penrith RSL show.

Yes. WOR New York makes its 1938 announcement about ‘Radio Fax’ on next Tuesday’s Phantom Dancer with Greg Poppleton. Every week, live from 107.3 2SER Sydney, online and over 23 radio stations across Australia, Greg Poppleton presents The Phantom Dancer, his multi-award-winning non-stop mix of swing and jazz from live 1920s-60s radio and TV. 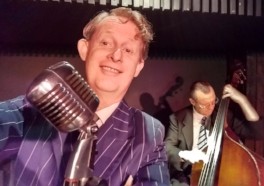 Builders Club
Three years at the Builders Club and another fun afternoon with our Wollongong friends. See article » 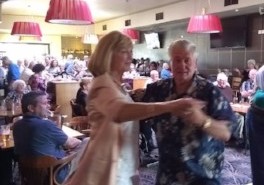 Corrimal Hotel
A full house for the whole afternoon as Greg Poppleton and band played for the Illawarra Jazz Club. See article »

This week’s 2 hour non-stop mix of swing and jazz from live 1920s – 1960s radio has Miles Davis and John Coltrane live in 1957, Wild Bill Davison and the crew from ‘This is Jazz’ in 1947 and Sydney swing band leader Frank Coughlan from 1937. All very symmetrical. And of course there’s a whole 2 hours of non-stop live swing and jazz, including a set of the great woman jazz singers, with the last half of the show being ALL VINYL. See the play list below.

Your Phantom Dancer Video of the Week is Julius Sumner Miller giving Dramatic Demonstrations in Physics on the matter of The Properties and Effects of Electric Currents. This is program 42, recorded at ABC-TV in Sydney in 1969. Enjoy…

SUBSCRIBE. Support The Phantom Dancer and Real Radio 107.3 2SER today!!! That’s the message of today’s Phantom Dancer. All 1920s-50s swing and jazz from radio broadcasts of the era with a money theme.

You can hear today’s show ONLINE NOW for a month at 2ser.com

2SER is community radio. It only gets funding from YOU the listener. It costs $1,000,000 to run 2SER. That’s why we need your support to keep The Phantom Dancer on air for another year.

The Phantom Dancer with myself, Greg Poppleton, began on 2SER in 1985! It was the only radio station that was warm to the idea of a swing and jazz show using live 1920s-60s broadcasts. That alone is a good reason to support 2SER.

2SER is a not-for-profit Community Radio Station in the heart of Sydney.

2SER has been broadcasting to the Greater Sydney Metropolitan area for 36 years and relies on the financial contributions of our listeners to help us continue to produce our unique and varied Stories, Music and Ideas.

Once a year we ask our listeners to financially support the station so if you like what we do then this is your opportunity to help us keep doing what we do – tell a lover, a friend, a family member or your pet!!

As well as supporting 2SER’s cutting edge stories, music and ideas, there are plenty of prizes up for grabs and if you sign up with your lover (or another), you will get a cosy night in on 2SER.

For more about supporting 2SER, all the prizes, and to support online READ ON.

And your Phantom Dancer Video of the Week is Professor Julius Sumner Miller on the 1969 ABC TV Science series, Dramatic Demonstrations in Physics, Episode 10: exciting adventures in the Properties Of Gases . Enjoy!