What do you do?

The venue you’re playing at has been undercut by not one, but two, nearby venues.

Audience numbers are down.

What do you do?

Well, if you’re Greg Poppleton at Mosman Bowling Club today, you put on a ‘helluva’ show for the club and the beautiful people who came to see and hear us.

You put on an intimate show – singing to each of the 40 guests individually -from the stage and table by table.

You bring people together and get the audience singing.

You tell personal stories, weave in an amazing anecdote about a song or two or three, and you sing a request or two that brings a tear to the eyes of the requesters.

And you have a swinging band:

In short, you create a ‘helluva’ show with great musicians that makes everyone happy. In fact, everybody left today with a smile and a desire to come back for more. Many left clutching a Greg Poppleton CD sold to them by Bev Evans. A CHILDHOOD HERO.

Mosman Bowling Club presents a different top notch jazz band for your enjoyment on the first Sunday of every month, 2 – 4:30pm. And they welcome new players and members, too. Get in touch.

MRS SPARKLE
Bev Evans was Mrs Sparkle in the Mr Sheen ads. Her talent made the ads hugely successful. As a result, she became Australia’s leading hand and placement model.

I used to watch Mrs Sparkle on TV as a very little kid and marvel at how natural she was while being incredibly precise in her movements. I’ve been in 60 TV commercials myself and looking natural while being ‘big’ as a TVC requires is a rare skill.

And I loved the music. Little did I know then that the song was ‘Mr Gallagher and Mr Sheen’, written in 1922. No, I’m not a ‘make-a-quick-buck-off-the-Great-Gatsby-movie’ blow-in. I’ve loved the music of the 1920s and 1930s eversince I first saw Louis Armstrong on TV when I was three years old.

Hear the mix after the 27 Feb broadcast at radio 2ser.com

I am in the process of memorising the German lyrics for ‘La Paloma’. La Paloma is probably the most recorded Spanish song in history. It has become a quasi-folk song in many cultures. Written by Sebastián Yradier as a contradanza (the progenitor of danzon, mambo and cha cha cha), it was published in Madrid in 1859 as a ‘Cancion Americana con acompañamiento de Piano’.

The lyrics I’m learning are those sung by Hans Albers in the 1943 film ‘Grosse Freiheit Nr 7’. This is one of three films in the Nazi era that celebrated the individual rather than fascist corporatist ideas.

Also in this week’s Phantom Dancer we’ll hear a set of swing from live 1936 radio. Other sets are dedicated to 1940s dance orchestras and there’s two sets of music radio from the 1950s.

…was one of the most popular German actors, and singers, of the twentieth century.

He was an actor in theatre and in more than a hundred silent films.

He then starred in the first German talkie Die Nacht gehört uns (The Night is Ours) in 1929. He was the big-mouthed strong man Mazeppa alongside Marlene Dietrich in her star-making film Der blaue Engel (The Blue Angel) in 1930.

Albers himself hit stardom that same year in the movie, The Copper.

In 1932 he starred in my favourite Albers film, ‘Quick’ in which he plays two roles, one being an English vaudeville clown, speaking German in an English accent.

Many of Albers’ movie songs became huge hits. We’ll hear four of them today on The Phantom Dancer, including ‘Gnaedige Frau komm’ und spiel’ mid mir’ from ‘Quick’. In the film he sings the song after sliding down a giant banjo on a theatre stage, then flying around the theatre until he lands on one of the balconies to serenade his lady love.

Although Albers became Germany’s most popular actor under the Nazi regime, he never supported the Nazis. He instead supported his Jewish girlfriend Hansi Berg. She left for Switzerland, then England in 1939, with Hans Albers continuing to financially support her until they reunited after the war. They stayed together until his death.

Nevertheless, he continued to star in major films during the war in ‘hero’ roles. After 1945, when the occupation powers didn’t want German heroes in German films, he was typecast in wise-aged-man roles.

He remained active in film and theatre until three months before his death due to alcohol related disease in 1960.

Your Phantom Dancer ‘Video of the Week’ #1 shows Hans Albers as the singing hero in living Agfacolour.

Presented by myself, Greg Poppleton, since 1985 on 107.3 2SER Sydney, the show is now re-broadcast over 23 stations of the Community Radio Network across Australia.

See the play of swing, jazz and dance in all styles from live 1920s-60s radio below.

SEER
This famous 1930s astrologer gives his prognostications for 1937 on  today’s Phantom Dancer. In fact, get ready for disappointment at the end of Set 1, where I play Wynn’s ‘wise words’ (and some musical excerpts) from the 1936 New Year’s Eve Rudy Vallee show.

You’ll hear most of what Wynn had to say about the year ahead. I cut it short for time. Think of the audience for the 1936 radio broadcast, they never got that Wynn wasted time back.

Wynn, born Sidney Kimball Bennett, wrote the stars for the New York Daily News. And it seems he didn’t do it for a laugh. He was ridiculously serious about himself, as you’ll hear.

SPOOKY
His claim to fame was a prediction he made in the NY Daily News in 1932. He ‘foresaw’ financial turmoil for early March of 1933. That’s when President Roosevelt closed the banks for a week as the US struggled with the Great Depression.

UNCANNY
Wynn’s predictions for 1937 are typically vague, and, well, predictable. More interesting is just a short list of what actually happened in 1937 out of the trillions of things Wynn’s charts failed to predict…

Here’s some footage of the first successful flying car, Waldo Waterman’s Arrowbile. How did Wynn miss this one? Probably the same way he missed foretelling his own 1926 car accident…(gosh, on today’s Phantom Dancer he warns Rudy Vallee to be ‘careful of cars’, spooky!)

Hi, here’s the latest live Greg Poppleton clip. It’s Tea for Two, written by Vincent Youmans and Irving Caesar for the 1925 musical No, No, Nannette.

An audience member filmed this on their smartphone at the latest Greg Poppleton show at Sydney Rowers.

The band and I hope you will enjoy the Tea for Two Cha-Cha and give it a thumb up on YouTube!

I also took some photos for you below.

Only the first minute of the video was useable. As people came up to dance, the band was obscured from the camera’s view. And their was camera shake and blur.

We’ll be back at Sydney Rowing Club on the beautiful Parramatta River on Easter Sunday 1 April.

Check out where we’ll be next on the band website gregpoppletonmusic.com

Looking through the drum kit at the Parramatta River below from the Greg Poppleton bandstand at Sydney Rowing Club.

The Greg Poppleton band in silhouette.

Contact. We play for festivals, clubs, weddings and parties. 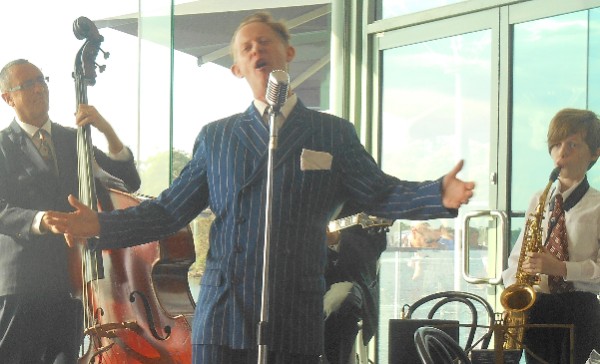 Greg Poppleton, Australia’s only authentic 1920s-1930s singer with over 1.1 Million YouTube views, and his swinging jazz band, are back at Sydney Rowing Club, 3pm 3 Dec, for their fun & energetic show. Don’t miss out! FREE!

Restaurant, Bistro, bar, river views. Tons of free parking. Right on Abbotsford Ferry wharf and at the terminus for the 438 City-Abbotsford bus. 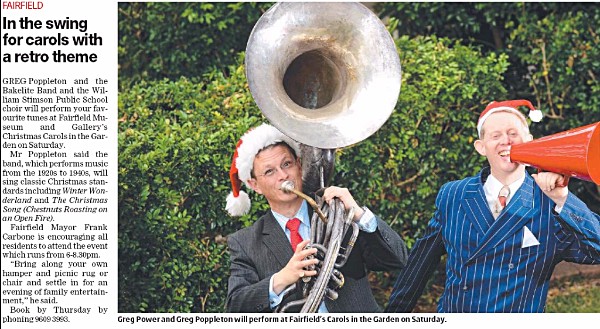 What a lovely way to spend an early evening! Greg and the 1920s – 1930s band will be a-carolling and playing the songs of the 1920s-30s at Fairfield Museum’s annual evening of holiday festivities! And it’s FREE!

Bring your picnic rugs, snacks and festive outfits for this annual family event, held in the open under shady trees in the Museum’s ‘Old Sydney Town’ style central square. 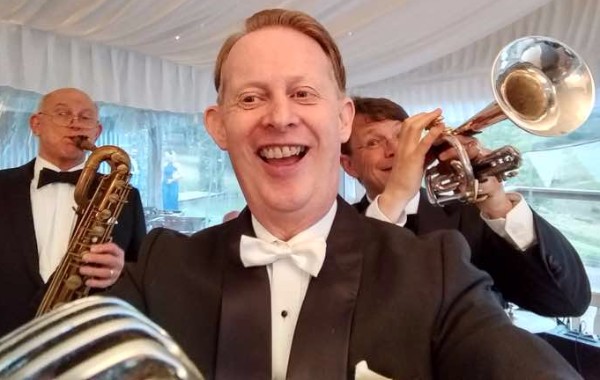 It’s a thrill to be asked back this year to play for one of our favourite clients. We have had an association with this client for six years.

As an example of what we do, please read Greg’s article about the wedding, and find out how Greg Poppleton and the band can add real 1920s – 1930s charm to your event.
Book Greg for your event 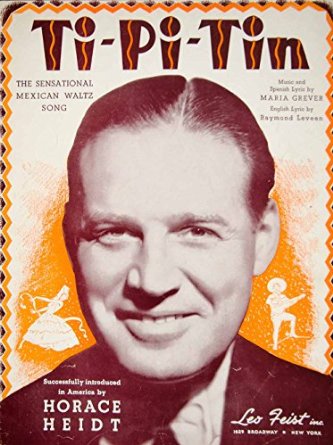 The Pick of November Band Photos 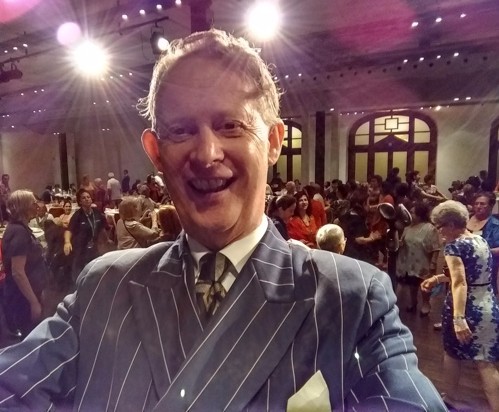 The Greg Poppleton band got the joint jumping in the Lower Sydney Town Hall Ballroom. A packed dance floor swung to the music of the 1920s and 1930s…

Deckers in the Night

Greg Poppleton provided the hi-octane musical atmosphere with a selection of bouncy 1920s – 30s tunes. Entertaining, energetic and engaging, Greg and the band…

Community variety shows are such fun. The Greg Poppleton band got the joint jumping in the Lower Sydney Town Hall Ballroom today. A packed dance floor swung to the music of the 1920s and 1930s played by singer Greg Poppleton and his quartet of world-toured jazz musicians…

And lots of guests wanted their photos taken with me singing. I managed to get some of the photo takers to capture a few snaps on my phone, too

Keeping the beat on drum kit and washboard with the Greg Poppleton band was Adam Barnard.

One of the acts I managed to get a photo of while they were rehearsing before the show was The Friendship Bridge Dance Group.

I also had my photo taken with the Friendship Bridge Dance Group as the Greg Poppleton band played, ‘This Time The Dream’s On Me’.

There was also Welcome to Country by Aunty Norma Ingram, Cultural Dance and song in a variety of Aboriginal Languages by Terry Olsen, Zumba Flash Mob,  Community Theatre with Kelly on piano (who I hadn’t seen since last century), Thor the Magician, the St Mary’s Cathedral Boys Choir and a wonderful MC.

Sydney’s popular Lord Mayor, Clover Moore, welcomed the concert goers. She was mobbed as she went from table to table.

The Greg Poppleton band instruments on stage and sound-checked ready for the show.

Greg Poppleton is Australia’s only authentic 1920s – 30s singer. Operatically trained, entertaining and energetic, Greg puts on a show full of verve and exceptional musicianship by the world-toured band.

We play for festivals, clubs, bars and all private occasions.

2017 is the official Centenary of Recorded Jazz. The first jazz record was recorded and released in 1917 (though there is a contender from 1916 called “That Funny Jas Band from Dixieland”.)

Jazz promoter Robert Scheltema de Heere re-booked me to MC his 100 years of jazz on record concert. I had MC’d his Jazz Band Ball last year.

The concert was held in the majestic Art Deco Petersham Town Hall in Sydney.
Petersham Town Hall was built in 1937-38  in the Inter-War Stripped Classical Style. Similar buildings in the style include the Finnish parliament building in Helsinki.

Here I’m posing in the foyer with the ‘All About Swing’ swing dance troupe. I’m standing next to one of the school’s principals, Siobhan Ford (in dark blue).

Backstage with All About Swing as they warm-up. (Greg Poppleton L and co-principal, Matt Adami R)

The night opened with Geoff Power’s Classic Jazz Band. For the last number of their set I sang ‘Cake Walking Babies From Home’ before introducing Paul Furniss’ Licorice All-Sorts.

A photo of the stage I took while waiting in the wings, ready to introduce the duelling jazz pianos of international stars Simon Tedeschi and Kevin Hunt.

Greg Poppleton is Australia’s only authentic 1920s – 1930s singer. Greg and his band play for festivals, clubs and bars as well as all private functions.